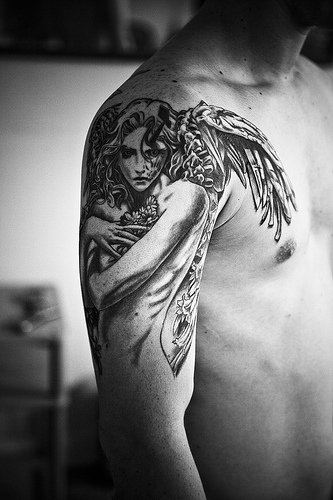 Angels are supernatural beings, a creation of the divine power. In the bible is believed that the will of God was carried out by the angels. Catholicism considers angels to be intelligent and spiritual creatures left on earth to protect every person and soul. Angels are mentioned often in the bible, not only as messengers of God, but as bearers of protection or punishment, also it is said that each person has a guardian angel.

As a tattoo design, angels are a symbol of devotion, spirituality and faith, signifying attachment with God. It also represents angel guidance, spiritual protection or was dedicated to a loved one who passes away but has taken a place among the angels to protect the ones left on Earth. So an angel tattoo can be a commemoration tattoo that symbolizes the love and connection one feels for his lost. Symbols that are often associated with angels are trumpets, harps, swords, scepters and wings. Angels are portrayed usually, as young men endowed with wings and auras around the head. The representation of angels as Cupid type babies appeared only during the Renaissance.

The most common place for an angel tattoo is on the upper arm or chest for males, and the shoulder or abdomen for women. Tattoos of angel wings are also very popular. They can be tattooed in black ink across the back in this way emphasizing on the feeling of protection
If you choose a great tattoo artist angel tattoos and angel wings can be a very beautiful and detailed designs of tattoos.

There are many types of angel tattoo; here you have a small category of tattoo designs inspired
by the figure of the angel: 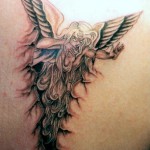 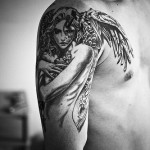 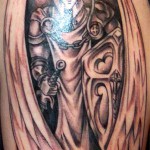 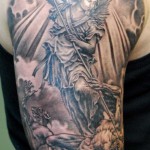 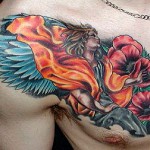 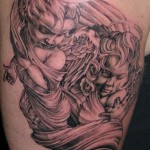 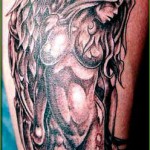 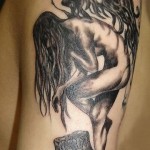 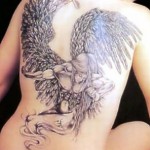 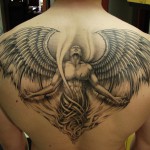 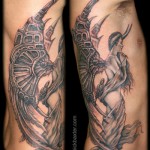